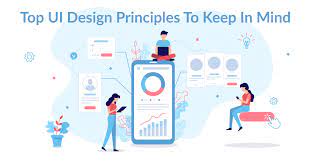 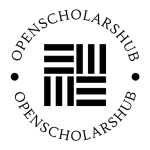 1- Strive for consistency:
Consistent sequences of actions should be required in similar situations;
identical terminology should be used in prompts, menus, and help screens; and
consistent color, layout, capitalization, fonts, and so on, should be employed
throughout. Exceptions, such as required confirmation of the delete command
or no echoing of passwords, should be comprehensible and limited in number.Golden rules of UI design
2-Seek universal usability:
Recognize the needs of diverse users and design for plasticity, facilitating
transformation of content. Novice to expert differences, age ranges, disabilities,
international variations, and technological diversity each enrich the spectrum of
requirements that guides design. Adding features for novices, such as explanations,
and features for experts, such as shortcuts and faster pacing, enriches the interface
design and improves perceived quality.
3-Offer informative feedback:
For every user action, there should be an interface feedback. For frequent and minor
actions, the response can be modest, whereas for infrequent and major actions, the
response should be more substantial. Visual presentation of the objects of interest
provides a convenient environment for showing changes explicitly.
4-Design dialogs to yield elosure:
Sequences of actions should be organized into groups with a beginning, middle, and
end. Informative feedback at the completion of a group of actions gives users the
satisfaction of accomplishment, a sense of relief, a signal to drop contingency plans
from their minds, and an indicator to prepare for the next group of actions. For
example, e-commerce websites move users from selecting products to the checkout,
ending with a clear confirmation page that completes the transaction. Golden rules of UI design
5-Prevent errors:
As much as possible, design the interface so that users cannot make serious errors;
for example, gray out menu items that are not appropriate and do not allow
alphabetic characters in numeric entry field sIf users make an error, the interface
should offer simple, constructive, and specific instructions for recovery. For example,
users should not have to retype an entire name-address form if they enter an invalid
zip code but rather should be guided to repair only the faulty part. Erroneous actions

should leave the interface state unchanged, or the interface should give instructions
about restoring the state.
6-Permit easy reversal of actions :
As much as possible, actions should be reversible. This feature relieves anxiety, since
users know that errors can be undone, and encourages exploration of unfamiliar
options. The units of reversibility may be a single action, a data-entry task, or a
complete group of actions, such as entry of a name-address block.
7-Keep users in control:
Experienced users strongly desire the sense that they are in charge of the interface
and that the interface responds to their actions. They don’t want surprises or
changes in familiar behavior, and they are annoyed by tedious data-entry sequences,
difficulty in obtaining necessary information, and inability to produce their desired
result. Golden rules of UI design
8-Reduce short-term memory load:
Humans’ limited capacity for information processing in short-term memory (the rule
of thumb is that people can remember “seven plus or minus two chunks” of
information) requires that designers avoid interfaces in which users must remember
information from one display and then use that information on another display. It
means that cellphones should not require reentry of phone numbers, website
locations should remain visible, and lengthy forms should be compacted to fit a
single display. These underlying principles must be interpreted, refined, and
extended for each environment. They have their limitations, but they provide a good
starting point for mobile, desktop, and web designers. The principles presented in
the ensuing sections focus on increasing users’ productivity by providing simplified
data-entry procedures, comprehensible displays, and rapid informative feedback to
increase feelings of competence, mastery, and control over the system.
9-Helping users identify:
diagnose and recover errors:
Where error messages should be expressed in plain language (don’t use system
language to explain what the system is doing), rather explain the problem and error
accurately and suggest a constructive solution.
And tell the user clearly and explicitly what is happening in the background when the
move is made.
10- Help and Documentation:
Although it is better if an interface can be used without documentation, it may
sometimes be important to provide assistance with documentation. Golden rules of UI design

The information should be easy to obtain and search for, focused on user activity,
and a list of steps, but not long.
(The golden rules of design will help in the way the user
experience. If the designer adheres to them, he will achieve
significant development and unprecedented success in his
field). 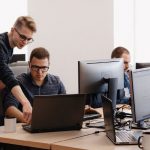 Previous Article Why Every Business Must Have 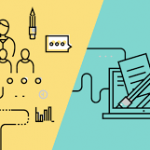 Daily someday is not a day of the week.

Daily. Someday is not a day of the week. Class aptent.

Open chat
Get Instant Feedback
Hello, how can we help you?